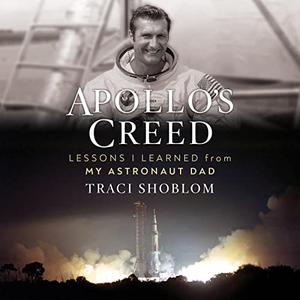 If you had the chance to talk to someone who went to the moon, what would you say? What questions would you ask? Imagine the stories, thoughts, and reflections he would share. "What was it like to be in zero gravity?" "Did you see any UFOs?" "Were you scared?" Imagine what it would be like to spend time with one of the twenty-four human beings in the history of our planet to go to the moon. Now imagine that the astronaut was your dad. Traci Shoblom is the youngest daughter of Apollo 12 astronaut Richard F. Gordon. She is an author, speaker, and a university lecturer. Although she’s published numerous nonfiction books, articles, academic chapters, scripts, and more, Apollo’s Creed is Traci’s "labor of love." In it, she shares the stories, anecdotes, and wisdom that her dad told her at home-when the cameras were off. When you’ve sat upon a rocket and had it set on fire, been shot into outer space and then have been all alone in a space capsule, you get a different perspective on life, and that unique viewpoint lives on as Richard’s legacy. These are Traci’s stories-the funny ones, the profound ones, and the rare chance for a daughter to ask her dad, "So, what was it like to go to the moon?"