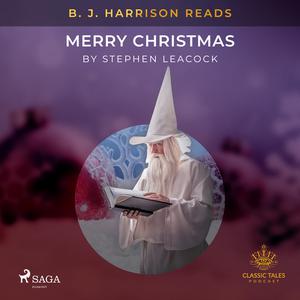 B. J. Harrison Reads Merry Christmas by Stephen Leacock
English | [email protected] kbps | 23 min | 32.9 MB
The First World War has left the world in agony. Disillusionment, hopelessness, and horror are rife when a despondent author gets a visit by Father Time and Father Christmas, who come to raise his spirits. He wishes for better days, but the war has taken everything, turning him into a hopeless and angry nihilist. Nevertheless, the Christmas spirit is here to bring hope and another chance at happiness. "Merry Christmas" is a poignant short story where Stephen Leacock unleashes his ironic and satirical potential, together with his usual socially critical tone, to construct a narrative about the erosion of Christmas values. A must for fans of the author and for winter time reading.

B. J. Harrison started his Classic Tales Podcast back in 2007, wanting to breathe new life into classic stories. He masterfully plays with a wide array of voices and accents and has since then produced over 500 audiobooks. Now in collaboration with SAGA Egmont, his engaging narration of these famous classics is available to readers everywhere.
Stephen Leacock (1869-1944) was a Canadian writer, teacher, and political person. During the first two decades of the 20th century, he was the leading humour writer in the English world. His works often satirize in a light-hearted way the social and political problems of the time, as well as the human condition. His most prominent work is "Sunshine Sketches of a Little Town", where he portrays the ordinary lives of the fictitious town of Mariposa.