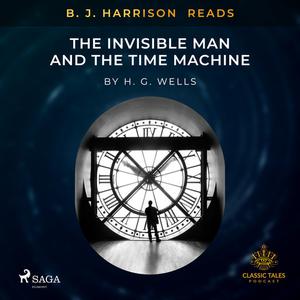 B. J. Harrison Reads The Invisible Man and The Time Machine by Herbert Wells
English | [email protected] kbps | 8h 54m | 733.4 MB
B. J. Harrison reads two late 19th-century science fiction classics by H. G. Wells. "The Time Machine," an ultimate classic, introduced the term "time machine" as we now know it. A man referred to as the Time Traveller moves hundreds of thousands of years ahead in time and finds Earth battling against the sun for survival . In "The Invisible Man," a scientist invents a way to become invisible and successfully applies this procedure on himself. The problem is that he does not know how to undo the process, which leaves an invisible and extremely violent man on the loose. Both stories have made it into film and television versions, most notably the Oscar-nominated film The Time Machine (1960) directed by George Pal and the film The Invisible Man (1933) directed by James Whale.

B. J. Harrison started his Classic Tales Podcast back in 2007, wanting to breathe new life into classic stories. He masterfully plays with a wide array of voices and accents and has since then produced over 500 audiobooks. Now in collaboration with SAGA Egmont, his engaging narration of these famous classics is available to readers everywhere.
Herbert George Wells (1866-1946), aka H. G. Wells, was an English writer and social critic. Wells wrote in a variety of genres and styles, most famously science fiction. Once called "the Shakespeare of science fiction", his works are full time travel, mad scientists and alternate universes. Wells’ short stories and novels have appeared on the screen countless times as film and television adaptations. One of these is "War of the Worlds" (2005) starring Tom Cruise, a film version of Wells’ novel The War of the Worlds.