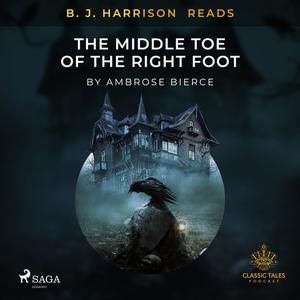 B. J. Harrison Reads The Middle Toe of the Right Foot by Ambrose Bierce
English | [email protected] kbps | 22 min | 31.1 MB
A man named Manton killed his wife and his two children and managed to get away with it. Ten years later he returns to the house where the crime was committed. He is recognized by the locals and he is provoked into a duel which is to be held in the haunted house where Manton killed his family. The locals were aiming to scare Manton away. However, the day after the duel Manton was found dead. Was it Manton’s opponent who had killed him or had the ghost of his past caught up to him? Find out the answers in Ambrose Bierce’s ghost story "The Middle Toe of the Right Foot".

B. J. Harrison started his Classic Tales Podcast back in 2007, wanting to breathe new life into classic stories. He masterfully plays with a wide array of voices and accents and has since then produced over 500 audiobooks. Now in collaboration with SAGA Egmont, his engaging narration of these famous classics is available to readers everywhere.
Ambrose Bierce was an American author and journalist who lived in the period 1842 – 1914. He is best known for his horror short stories, but he was also considered to be one of the pioneering writers of realist fiction. Ambrose Bierce was often called "Bitter Bierce" because of his cynicism and sardonic view of human nature, a point of view which transpires mainly in "The Devil’s Dictionary", a work which was named as one of "The 100 Greatest Masterpieces of American Literature". Other popular works by Bierce are "An Occurrence at Owl Creek Bridge" and "Tales of Soldiers and Civilians". Ambrose Bierce’s interesting life ended as if it had been Descriptionted by himself. The last that is known of him is a letter he wrote to a friend, which said "I leave here tomorrow for an unknown destination", and he was never seen again.