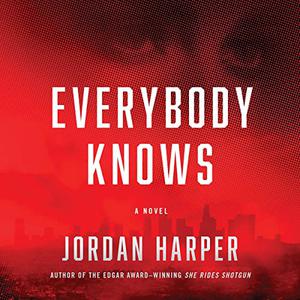 Welcome to Mae Pruett’s Los Angeles, where "Nobody talks. But everybody whispers." As a "black-bag" publicist tasked not with letting the good news out but keeping the bad news in, Mae works for one of LA’s most powerful and sought-after crisis PR firms, at the center of a sprawling web of lawyers, PR flaks, and private security firms she calls "The Beast." They protect the rich and powerful and depraved by any means necessary.
After her boss is gunned down in front of the Beverly Hills Hotel in a random attack, Mae takes it upon herself to investigate and runs headfirst into The Beast’s lawless machinations and the twisted systems it exists to perpetuate. It takes her on a roving neon joyride through a Los Angeles full of influencers pumped full of pills and fillers; sprawling mansions footsteps away from sprawling homeless encampments; crooked cops and mysterious wrecking crews in the middle of the night.
Edgar Award-winner Jordan Harper’s EVERYBODY KNOWS is addicting and alarming, a "juggernaut of a novel" and "an absolute tour de force." It is what the crime novel can achieve in the modern age: portray the human lives at the center of vast American landscapes, and make us thrill at their attempts to face impossible odds.
"The book everybody’s been waiting for" -Michael Connelly
"An absolute tour de force"-S. A. Cosby
"The best mystery novel I’ve read in years" -James Patterson