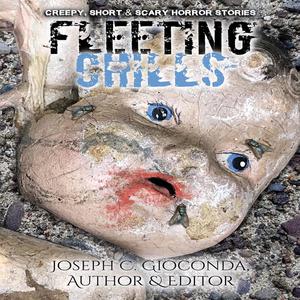 Fleeting Chills by Joseph C. Gioconda
English | [email protected] kbps | 4h 36m | 380.4 MB
FLEETING CHILLS is a series of thirty-three weird, creepy, short and scary horror stories by authors Joseph C. Gioconda, Grace Elizabeth, Amy Yun Yu, Isabel Rincón, Petar Vrbich and others.A jealous teenager lures his rival into a tomb.A five-year old child speaks in a voice beyond his years.A therapist tells his patient to jump at every opportunity.Trapped in an isolated funeral home, a man must get through the long night.A spirit desperately wants to wed a living woman and refuses to take no for an answer.Three boys on a road trip get lost…forever.Some musicians really put their heart and soul into their work.Amanda introduces her boyfriend to the person living inside her.Selling a human skull shouldn’t be difficult. Until a psychic gets involved.Two sons see an apparition of their father…from thirty years in the future.Near death experiences aren’t all beautiful…An eccentric inventor seeks patents on some novel and disturbing devices.Christmas should be a time of joy, but when a man goes missing, his family tries to celebrate without him.Buying a mysterious box on the DarkWeb leads a man down a rabbit hole of murder.Confessing his sins to a priest, a man describes having a dark power.A woman plans elaborate revenge on her cheating lover, only to find the tables turned.