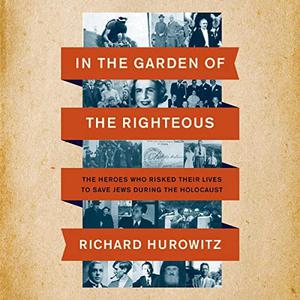 In the Garden of the Righteous: The Heroes Who Risked Their Lives to Save Jews During the Holocaust (Audiobook)
English | ASIN: B0B233HCDD | 2023 | 14 hours and 29 minutes | [email protected] kbps | 416 MB
Author: Richard Hurowitz
Narrator: Paul Heitsch

Yad Vashem, the Holocaust Memorial in Jerusalem, has recognized more than 27,000 individuals as "Righteous Among the Nations"-non-Jewish people such as Raoul Wallenberg and Oskar Schindler who risked their lives to save their persecuted neighbors. In the Garden of the Righteous chronicles extraordinary acts at a time when the moral choices were stark, the threat immense, and the passive apathy of millions predominated. Deeply researched and astonishingly moving, it focuses on ten remarkable stories, including that of the circus ringmaster Adolf Althoff and his wife Maria, the Portuguese diplomat Aristides de Sousa Mendes, the Italian cycling champion Gino Bartali, the Polish social worker Irena Sendler, and the Japanese spy Chinue Sugihara, who provided hiding places, participated in underground networks, refused to betray their neighbors, and secured safe passage. They repeatedly defied authorities and risked their lives, their livelihoods, and their families to save the helpless and the persecuted. In the Garden of the Righteous is a testament to their kindness and courage.