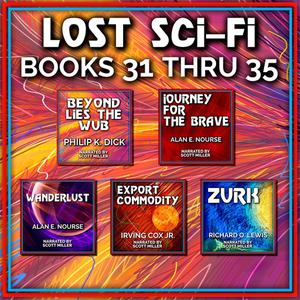 Beyond Lies The Wub by Philip K. Dick –The slovenly wub might well have said: Many men talk like philosophers and live like fools.
Journey for the Brave by Alan E. Nourse –Courage will be a big qualification for the pilot who flies the first moon rocket. But who decides if a man is brave-or a coward?…
Wanderlust by Alan E. Nourse –Tad, like other young men, looked to thespaceways for adventure. But George Barlow, like other fathers, knew that disaster would end his Wanderlust
Export Commodity by Irving Cox Jr. –Henig was sent to obtain a soil sample of the planet. It was a routine assignment, but not necessarily the only method for discovering an-Export Commodity
Zurk by Richard O. Lewis –Gentle Marene was next when the black space cruiser called for its youth-levy. If only Zurk would spark to life-Zurk, this huge, part-human war-machine of tubular steel muscles and blank, mechanical mind.