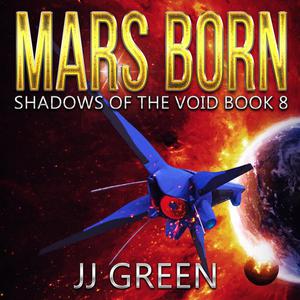 Mars Born by J.J. Green
English | [email protected] kbps | 3h 04m | 253.7 MB
Mars holds secrets beyond the realms of the known universe.Ex-starship security chief Jas Harrington has been battling hostile aliens called Shadows, who are invading Earth. After finally alerting the Transgalactic Council of Earth’s plight, she has escaped aboard the starshipBricoleur.

In the brief respite from battle, she and her companions must decide the best way to continue the fight.
They travel to Jas’ birthplace, Mars, where she uncovers some surprising facts about her past.
Then, in the midst of the declining colony world, Jas finds something that might be the key to everything: where the Shadows come from, how they operate, and how to defeat them.
The race is on to free the keepers of the secret knowledge and enlist them in the desperate war to save the galaxy.
Mars Bornis Book eight in the fast-paced, action-packed Shadows of the Void space opera serial.