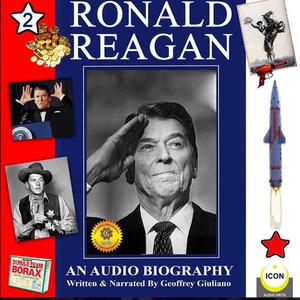 Ronald Reagan; An Audio Biography #2 by Geoffrey Giuliano
English | [email protected] kbps | 1h 06m | 90.8 MB
Ronald Wilson Reagan was an American politician who served as the 40th president of the United States from 1981 to 1989 and became a highly influential voice of modern conservatism. Prior to his presidency, he was a Hollywood actor and union leader before serving as the 33rd governor of California from 1967 to 1975.Musical consultant Alex Franchi in MilanProduction executive Avalon Giuliano in LondonICON Intern Eden Giuliano in Delhi Music By AudioNautix With Their Kind Permission©2020 Icon Audio Arts (P) 2020 Icon Audio Arts LLC