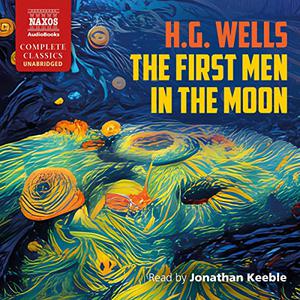 The First Men in the Moon (Audiobook)
English | November 29, 2022 | ASIN: B0BNLXNBPP | [email protected] kbps | 7h 5m | 393 MB
Author: H.G. Wells | Narrator: Jonathan Keeble
Published in 1901, The First Men in the Moon is one of the earliest science-fiction novels in the English language. An impecunious businessman, Bedford, retreats to the Kent coast where he meets the archetypal absent-minded scientist, Dr Cavor, who is on the point of producing a gravity-defying material. His experiments prove successful, making possible one of man’s oldest dreams: a journey to the moon. The two men embark on this fantastic voyage-Bedford motivated by the prospect of wealth, and Cavor by the thirst for knowledge. However, when they arrive, they find a world of freezing nights and sweltering days, and signs of a threatening alien presence, from which they may never escape.

The novel invites obvious comparisons with its predecessor, Jules Verne’s From the Earth to the Moon, though Wells’s approach markedly differs from that of his French counterpart, with Wells being more concerned by the adventure on the moon, even at the expense of scientific plausibility.