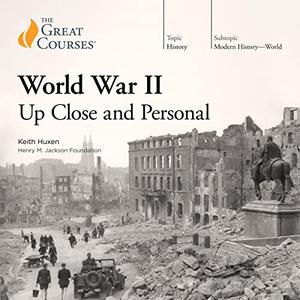 World War II was one of the defining moments in modern history, a global conflagration that transformed the world through battles, shifting alliances, and horrors unlike anything in recorded history. The story is often told as a series of great campaigns by famous generals, dramatic turning points, and cataclysmic combat. But what about the millions of ordinary people – the citizens and soldiers whose names none of us know but whose impact rippled through every aspect of the war? From the icy front lines of Soviet Russia to the bombing campaigns against Britain to the American submarines lurking beneath the choppy waters of the Pacific, step into the shoes of remarkable everyday men and women in World War II: Up Close and Personal. From the Nazi’s propaganda machine to recruit German youth and the shocking Japanese invasion of China to the bloody Battle of the Bulge and the dropping of the atomic bombs, Keith traces the course of the war to give you a sense of its global scope. While he touches on the alliances and strategies and dynamic weapons of war, history is the story of people.