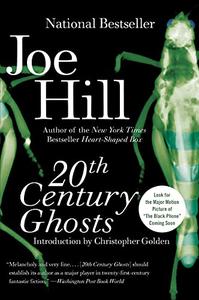 Imogene is young, beautiful . . . and dead, waiting in the Rosebud Theater one afternoon in 1945. . . .
Francis was human once, but now he’s an eight-foot-tall locust, and everyone in Calliphora will tremble when they hear him sing. . . .
John is locked in a basement stained with the blood of half a dozen murdered children, and an antique telephone, long since disconnected, rings at night with calls from the dead. . . .
Nolan knows but can never tell what really happened in the summer of ’77, when his idiot savant younger brother built a vast cardboard fort with secret doors leading into other worlds. . . .
The past isn’t dead. It isn’t even past. . . .
The first collection from #1 New York Times bestselling author Joe Hill, 20th Century Ghosts isan inventive and chilling compendium that established this award-winning, critically acclaimed author as "a major player in 21st-century fantastic fiction" (Washington Post).