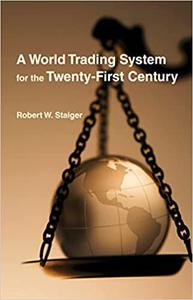 Global trade is in trouble. Climate change, digital trade, offshoring, the rise of emerging markets led by China: Can the World Trade Organization (WTO), built for trade in the twentieth century, meet the challenges of the twenty-first? The answer is yes, Robert Staiger tells us, arguing that adapting the WTO to the changed economic environment would serve the world better than a radical reset.
Governed by the WTO, on the principles of the General Agreement on Tariffs and Trade (GATT), global trade rules traditionally focus on "shallow integration"-with an emphasis on reducing tariffs and trade impediments at the border-rather than "deep integration," or direct negotiations over behind-the-border measures. Staiger charts the economic environment that gave rise to the former approach, explains when and why it worked, and surveys the changing landscape for global trade. In his analysis, the terms-of-trade theory of trade agreements provides a compelling framework for understanding the success of GATT in the twentieth century. And according to this understanding, Staiger concludes, the logic of GATT’s design transcends many, if not all, of the current challenges faced by the WTO.
With its penetrating view of the evolving global economic environment,
Read more