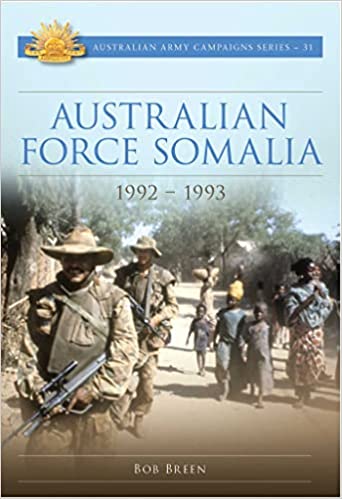 In 1992, civil war, drought and economic collapse left four million Somalis destitute, displaced and starving. Twenty-six nations sent their young men and women to make sure that food reached those who needed it. Australia joined this international ‘coalition of the willing’ with the Australian Force Somalia comprised of a 1,000-strong battalion group based on 1st Battalion, the Royal Australian Regiment from the 3rd Brigade in Townsville as well as a small national liaison headquarters from 1st Division in Brisbane. Opposing the US-led Unified Task Force were Somali warlords and their militia armies that had been pillaging humanitarian aid and terrorising the Somali population during a bloody civil war. American airpower forced the warlords to send their armies into hiding across the border, but thousands of bandit groups, criminal gangs and violent political factions remained to threaten humanitarian operations and the safety hundreds of ex-patriate aid agency staff.
…