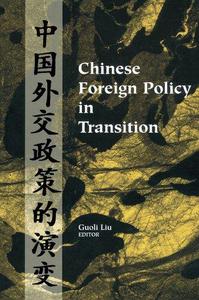 Chinese Foreign Policy in Transition By Guoli Liu (editor)
2004 | 430 Pages | ISBN: 0202307530 | PDF | 63 MB
Since the establishment of the People’s Republic of China in 1949, and particularly after the opening brought about by economic reforms roughly thirty years thereafter, China has become an influential player in regional and global affairs. Increasingly, both American and European policymakers examine Chinese foreign policy as a flexible, pragmatic, and significant element in world affairs. This has accelerated in the middle of the new first decade of this century, as business firms and political officials have developed interests in the sources, processes, and significance of China’s reemergence as a global force. This volume examines how, in conjunction with rapid economic growth and profound social transformation, China’s foreign policy is experiencing significant transition.The purpose of this truly deep and probing collection is to deepen Western understanding of the sources, substance, and significance of Chinese foreign policy–with a focus on the post Cold War environment. Contributors include academic specialists, area researchers, and distinguished journalists, all with firsthand experience in the field of China studies. The volume is divided into four parts: (1) theory and culture; (2) perspective and identity; (3) bilateral relationships; and (4) retrospective and prospective essays on Chinese policy concerns. The volume is sensitive to changes in national leadership and Communist Party structure as well as continuity and change in foreign policy. As Lowell Dittmer of the University of California notes in his Foreword, "precisely because it is so difficult to do well, the analysis of foreign policy is often conducted rather tritely.Thus it is a real pleasure to find assembled here a treasure trove of some of the finest work by some of the field’s most penetrating minds. This is fortunate, for at the core of this volume is one of the biggest and most portentous questions to confront the world at the outset of the twenty-first century. That question is: in the decades to come, what role will China play in the world? As the homeland of about a fifth of mankind, this question is almost guaranteed relevance whatever the fate of China’s domestic economy."