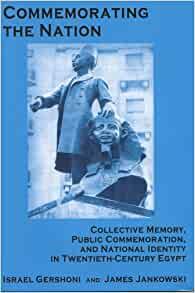 Commemorating the Nation: Collective Memory, Public Commemoration, and National Identity in Twentieth-century Egypt By Israel Gershoni, James Jankowski
2004 | 337 Pages | ISBN: 0970819919 | PDF | 44 MB
Commemorating the Nation is a study of the relationship between public commemoration and national identity in Egypt over the course of the twentieth century. Appropriating insights from recent theoretical discussions of collective memory and public commemoration, it examines the modes by which different Egyptian communities of memorythe state under successive regimes; rival political forces and movements; elite and non-elite groups within civil societyremembered and commemorated the Egyptian national struggle, its defining moments and heroic figures, in specific sites of national memory. The book’s analysis ranges across the twentieth century, tracing the changing place of selected sites of national memory from the pre-World-War-I years through the decades of the parliamentary monarchy to the era of the Egyptian Republic. Each of its three main sections is devoted to a different form of commemoration. The first is the nationalist art of Egypt’s ""national sculptor"" Mahmud Mukhtar (1891-1934) and how his monumental icons expressing the nationalist ethos, specifically his sculpture Nahdat Misr and his statues of the leader of the 1919 Revolution, Sa`d Zaghlul, have been represented and re-represented by successive generations of Egyptians. The second section analyzes the modalities through which the historic figures of Egypt’s Nationalist Party, Mustafa Kamil (1874-1908) and Muhammad Farid (1868-1919), have been preserved and commemorated through the remainder of the twentieth century. The third section considers national holiday celebrations as sites of Egyptian collective memory, particularly the celebration of the July 1952 Revolution during the reign of Gamal Abdel Nasser and the commemoration of the 1973 Crossing of the Suez Canal under his successor Anwar al-Sadat. The book is the product of fieldwork in Egypt as well as of extensive research in Egyptian publications. By analyzing nationalism through the prism of public commemoration, the work extends our understanding of the shaping of national identity and the evolution of national imagining in modern Egypt. Although it focuses on Egypt, its findings have implications for the study of collective memory and public commemoration in general.