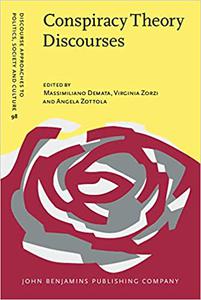 Massimiliano Demata, Virginia Zorz, "Conspiracy Theory Discourses"
English | ISBN: 9027212708 | 2022 | 509 pages | PDF | 22 MB
Conspiracy Theory Discourses addresses a crucial phenomenon in the current political and communicative context: conspiracy theories. The social impact of conspiracy theories is wide-ranging and their influence on the political life of many nations is increasing. Conspiracy Theory Discourses bridges an important gap by bringing discourse-based insights to existing knowledge about conspiracy theories, which has so far developed in research areas other than Linguistics and Discourse Studies. The chapters in this volume call attention to conspiracist discourses as deeply ingrained ways to interpret reality and construct social identities. They are based on multiple, partly overlapping analytical frameworks, including Critical Discourse Analysis, rhetoric, metaphor studies, multimodality, and corpus-based, quali-quantitative approaches. These approaches are an entry point to further explore the environments which enable the proliferation of conspiracy theories, and the paramount role of discourse in furthering conspiracist interpretations of reality.