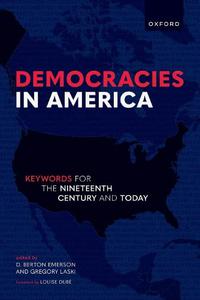 Democracies in America: Keywords for the 19th Century and Today edited by D. Berton Emerson, Gregory Laski
English | January 4, 2023 | ISBN: 0198865694, 0192871870 | True EPUB | 336 pages | 1 MB
Ask someone their thoughts about "democracy" and you’ll get many different responses. Some may presume it a thing once established yet now under threat. Others may believe that democracy has always been compromised by the empowered few. In the contemporary United States, marked by constituencies across the political spectrum believing that their voices have gone unheard, "democracy" gets wielded in so many divergent directions as to be rendered nearly incoherent.

Democracies in America reminds us that this reality is nothing new. Focusing on the various meanings of "democracy" that circulated in the long nineteenth century, the book collects twenty-five essays, each taking up a keyword in the language we use to talk about democracy. Penned by a group of diverse intellectuals, the entries tackle terms both commonplace (citizenship and representation) and paradigm-stretching (disgust and sham). The essays thus consider the relationship between "America" and "democracy" from multiple disciplinary angles and from different moments in a major historical period-amidst the vitality of the revolutionary epoch, in the contentious lead-up to the Civil War, and through the triumphs and failures of Reconstruction and the early reforms of the Progressive Era-while making both forward and backward glances in time.
The book frames its keywords around a series of enduring democratic dilemmas and questions, and provides extensive resources for further study. Ultimately the volume cultivates, for students and teachers in classrooms, as well as citizens in libraries and cafés, a language to deliberate about the possibilities and problems of democracy in America.