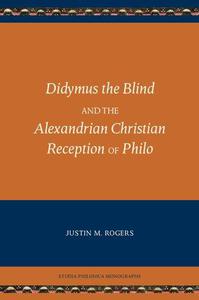 Didymus the Blind and the Alexandrian Christian Reception of Philo (Studia Philonica Monograph 8) (Studia Philonica Monographs) By Justin M. Rogers
2017 | 278 Pages | ISBN: 1628371986 | PDF | 3 MB
Explore the Jewish traditions preserved in the commentaries of a largely neglected Alexandrian Christian exegete Justin M. Rogers surveys commentaries on Genesis, Job, Psalms, Ecclesiastes, and Zechariah by Didymus the Blind (ca. 313-398 CE), who was regarded by his students as one of the greatest Christian exegetes of the fourth century. Rogers highlights Didymus’s Jewish sources, zeroing in on traditions of Philo of Alexandria, whose treatises were directly accessible to Didymus while he was authoring his exegetical works. Philonic material in Didymus is covered by extensive commentary, demonstrating that Philo was among the principle sources for the exegetical works of Didymus the Blind. Rogers also explores the mediating influence of the Alexandrian Christian tradition, focusing especially on the roles of Clement and Origen. Features Fresh insignts into the Alexandrian Christian reception of Philo A thorough discussion of Didymus’s exegetical method, particularly in the Commentary on Genesis Examination of the use and importance of Jewish and Christian sources in Late Antique Christian commentaries