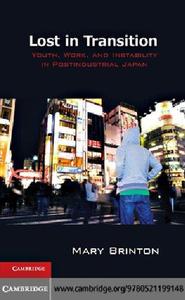 Lost in Transition: Youth, Work, and Instability in Postindustrial Japan By Mary C. Brinton
2010 | 228 Pages | ISBN: 052119914X | PDF | 1 MB
Lost in Transition tells the story of the "lost generation" that came of age in Japan’s deep economic recession in the 1990s. The book argues that Japan is in the midst of profound changes that have had an especially strong impact on the young generation. The country’s renowned "permanent employment system" has unraveled for young workers, only to be replaced by temporary and insecure forms of employment. The much-admired system of moving young people smoothly from school to work has frayed. The book argues that these changes in the very fabric of Japanese postwar institutions have loosened young people’s attachment to school as the launching pad into the world of work and loosened their attachment to the workplace as a source of identity and security. The implications for the future of Japanese society – and the fault lines within it – loom large.