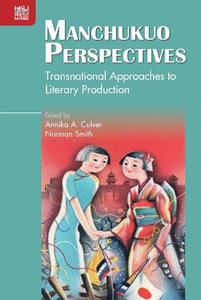 Manchukuo Perspectives: Transnational Approaches to Literary Production By Annika A. Culver (editor), Norman Smith (editor)
2020 | 328 Pages | ISBN: 9888528130 | PDF | 11 MB
This groundbreaking volume critically examines how writers in Japanese-occupied northeast China negotiated political and artistic freedom while engaging their craft amidst an increasing atmosphere of violent conflict and foreign control. The allegedly multiethnic utopian new state of Manchukuo (1932-1945) created by supporters of imperial Japan was intended to corral the creative energies of Chinese, Japanese, Koreans, Russians, and Mongols. Yet, the twin poles of utopian promise and resistance to a contested state pulled these intellectuals into competing loyalties, selective engagement, or even exile and death―surpassing neat paradigms of collaboration or resistance. In a semicolony wrapped in the utopian vision of racial inclusion, their literary works articulating national ideals and even the norms of everyday life subtly reflected the complexities and contradictions of the era. Scholars from China, Korea, Japan, and North America investigate cultural production under imperial Japan’s occupation of Manchukuo. They reveal how literature and literary production more generally can serve as a penetrating lens into forgotten histories and the lives of ordinary people confronted with difficult political exigencies. Highlights of the text include transnational perspectives by leading researchers in the field and a memoir by one of Manchukuo’s last living writers.