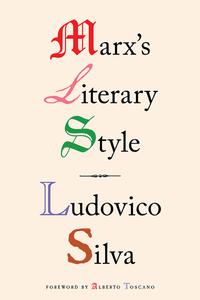 In Marx’s Literary Style, the Venezuelan poet and philosopher Ludovico Silva argues that much of the confusion around Marx’s work results from a failure to understand his literary mode of expression.
Through meticulous readings of key passages in Marx’s oeuvre, Silva isolates the key elements of his style: his search for an "architectonic" unity at the level of the text, his capacity to express himself dialectically at the level of the sentence, and, above all, his great gift for metaphor.
Silva’s unique sensitivity to Marx’s literary choices allows him to illuminate a number of terms that have been persistently, and fatefully, misunderstood by many of Marx’s most influential readers, including alienation, reflection, and base and superstructure. At the heart of Silva’s book is his contention that we we cannot hope to understand Marx if we treat him as a scientist, a philosopher, or a literary writer, when he was in fact all three at once.
Originally published in 1971, this is a key work by one of the most important Latin American Marxists of the twentieth century. This edition, which marks the first appearance of one of Silva’s works in English, features an introduction by Alberto Toscano.