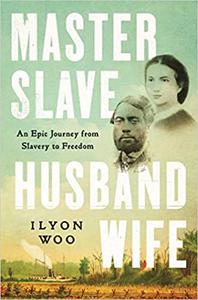 Ilyon Woo, "Master Slave Husband Wife: An Epic Journey from Slavery to Freedom"
English | ISBN: 1501191055 | 2023 | 416 pages | EPUB | 25 MB
The remarkable true story of Ellen and William Craft, who escaped slavery through daring, determination, and disguise, with Ellen passing as a wealthy, disabled White man and William posing as "his" slave.

In 1848, a year of international democratic revolt, a young, enslaved couple, Ellen and William Craft, achieved one of the boldest feats of self-emancipation in American history. Posing as master and slave, while sustained by their love as husband and wife, they made their escape together across more than 1,000 miles, riding out in the open on steamboats, carriages, and trains that took them from bondage in Georgia to the free states of the North.
Along the way, they dodged slave traders, military officers, and even friends of their enslavers, who might have revealed their true identities. The tale of their adventure soon made them celebrities, and generated headlines around the country. Americans could not get enough of this charismatic young couple, who traveled another 1,000 miles criss-crossing New England, drawing thunderous applause as they spoke alongside some of the greatest abolitionist luminaries of the day-among them Frederick Douglass and William Wells Brown.
But even then, they were not out of danger. With the passage of an infamous new Fugitive Slave Act in 1850, all Americans became accountable for returning refugees like the Crafts to slavery. Then yet another adventure began, as slave hunters came up from Georgia, forcing the Crafts to flee once again-this time from the United States, their lives and thousands more on the line and the stakes never higher.
With three epic journeys compressed into one monumental bid for freedom,
Read more