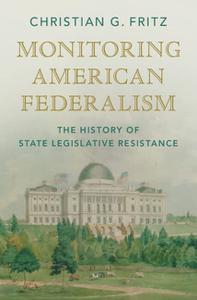 Monitoring American Federalism: The History of State Legislative Resistance
English | 2023 | ISBN: 1009325574 | 425 Pages | PDF | 2.4 MB
Monitoring American Federalism examines some of the nation’s most significant controversies in which state legislatures have attempted to be active partners in the process of constitutional decision-making. Christian G. Fritz looks at interposition, which is the practice of states opposing federal government decisions that were deemed unconstitutional. Interposition became a much-used constitutional tool to monitor the federal government and organize resistance, beginning with the Constitution’s ratification and continuing through the present affecting issues including gun control, immigration and health care. Though the use of interposition was largely abandoned because of its association with nullification and the Civil War, recent interest reminds us that the federal government cannot run roughshod over states, and that states lack any legitimate power to nullify federal laws. Insightful and comprehensive, this appraisal of interposition breaks new ground in American political and constitutional history, and can help us preserve our constitutional system and democracy.