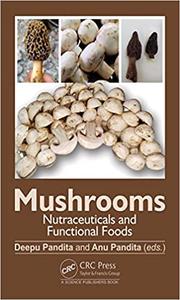 There are around 1.5 million fungal species worldwide. Out of these around 14,000 species produce fruiting bodies known as mushrooms, and around 2000 species are edible, and only 270 are reported to be medicinal. The fungal kingdom is phylogenetically closer to humans than plants, so gives better health benefits to human systems.
This book educates readers on the nutritional, pharmaceutical and medicinal values of different mushrooms and their utilization as nutraceuticals and functional foods for human security. It reviews the current knowledge on the distribution of edible mushrooms, its general characteristics, morphology, nutritional profile and properties, pharmacological importance, and biological activities. Health benefits of mushrooms, antioxidant and secondary metabolite profiling, major biological activities of mushroom-derived secondary metabolites, functional foods based on the mushrooms open doors for therapies, products with added value, toxicology, and side effects if any are also highlighted.
The book is intended for a large and varied audience – researchers, scientists, and scholars in academia, mushroom growers and industries, nutritionists, dietitians, food scientists, clinicians, doctors, drug industries, pharmacy, biotechnologists, biochemists, botanists, mycologists, and general masses.