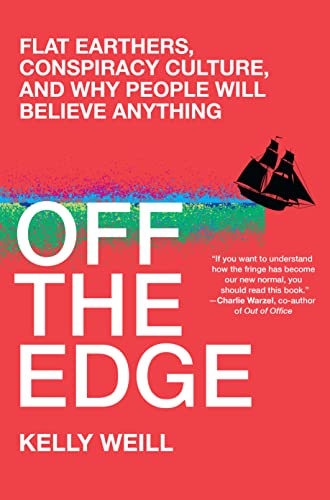 Since 2015, there has been a spectacular boom in a nearly two-hundred-year-old delusion-the idea that we all live on a flat plane, under a solid dome, ringed by an impossible wall of ice. It is the ultimate in conspiracy theories, a wholesale rejection of everything we know to be true about the world in which we live. Where did this idea come from? Weill draws a straight line from today’s conspiratorial moment back to the early days of Flat Earth theory in the 1830s, showing the human impulses behind divergences in belief. Faced with a complicated world out of our individual control, we naturally seek patterns to explain the inexplicable. The only difference between then and now? Social media. And, powered by Facebook and YouTube algorithms, the Flat Earth movement is growing.
At once a definitive history of the movement and a readable look at its expansive, absurd, and dangerous present, Off the Edge introduces us to a cast of larger-than-life characters, from 19th-century grifters to 20th-century small-town tyrants to the provocateurs of Alex Jones’s early-aughts internet, whose rancor sowed the early seeds of our modern division. We accompany Weill to Flat Earther conferences, where we meet moms on vacation, determined creationists, scammy YouTube celebrities and their victims, neo-Nazi rappers, and even a man determined to fly into space in a homemade rocket-powered balloon-whose tragic death proves as senseless and absurd as the theory he set out to prove.
Incisive and clear-eyed, Off the Edge tells a powerful story about belief, exploring how we arrived at this moment of polarized realities and explaining what needs to happen so that we might all return to the same spinning globe.