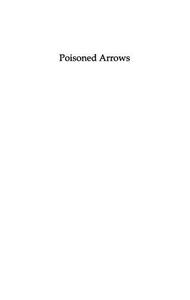 Poisoned Arrows: The Stalin-choibalsan Mongolian Massacres, 1921-1941 By Shagdariin Sandag; Harry H. Kendall; Frederic E. Wakeman Jr.
1999 | 248 Pages | ISBN: 0813337100 | PDF | 10 MB
Poisoned Arrows: The Stalin-Choibalsan Mongolian Massacres, 1921-1941 reveals to an English speaking readership for the first time the truth about the massacres conducted between 1921-1941 by the Stalinist KGB and its puppet Mongolian counterpart in converting the historic home of Genghis Khan into the world’s second communist state and keeping it isolated from the world under Soviet domination for seventy years. Following "orders from Moscow," the Mongolian leader Choibalsan and the Soviet-Mongolian KGB ruthlessly executed all of Mongolia’s top governmental and party leaders, the nation’s most prominent religious and intellectual figures and tens of thousands of innocent citizens. Among those killed were Dogsomiin Bodoo, first prime minister of the Mongolian People’s Republic; Soliin Danzan and Ts. Dambadorj, chairmen of the Central Committee of the Mongolian People’s Party; Prime Ministers Peljidiin Genden and Aandiin Amur, and Marshal G. Demid. The Mongolian security agency, under the guidance of the Soviet KGB, was also guilty of attacking and destroying Mongolia’s unique culture. The Lamaistic religion was banned, lamas slaughtered, temples and monasteries destroyed and invaluable religious artifacts were stolen and transported to the USSR. The massacre of leading citizens in every community led to the decline of towns and regional centers and caused irreparable damage to productivity in the forcibly isolated country. This book is based on secret archival documents and other rare materials to which the public was granted access following Mongolia’s 1989-1990 democratic revolution. The author’s father was a victim of the massacres, adding a personal element to the story. Drawing on his experience as a member of a prisoner’s family and interviews with other survivors and their families, Sandag describes the reign of terror conducted by the "Green Hats" of Mongolia’s Internal Security Ministry and how the Mongols survived a time of fear and mistrust.