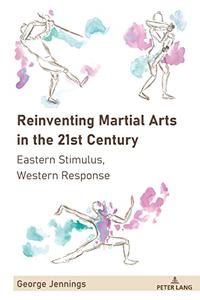 Based on over 15 years of research, this text proposes a new definition of the martial arts to examine how such fighting systems are being re-imagined and reconstructed beyond the arenas of combat and sport in the 21st century Western context. Taking the viewpoint of the martial arts as art forms open to reinterpretation, this unique book considers the ways in which martial arts can be used for different purposes, such as within movement systems and for self-help and therapy. However, the martial arts industry is a highly unregulated space. The book, therefore, considers the ways in which the martial arts are being regulated by Western influencers on social media as well as more formal international organisations connected to UNESCO. The project then examines the lives of long-term martial arts instructors and practitioners of historical European martial arts (HEMA), Taijiquan (Tai Chi Chuan), Wing Chun Kung Fu and other internal martial arts such as Cheng Hsin. This book draws on a wide range of data sources including autoethnography, ethnography, life history interviews and social media and textual analysis to paint a vivid picture of the reinvention process in contemporary society. It shows how elements of the martial arts (often from East Asian societies) are being adapted, critiqued, managed and merged to suit the social needs of today’s martial artists and the public. This monograph will appeal to all scholars and students interested in combat sports, martial arts and physical culture from a social scientific and qualitative perspective.
"…his research on Mexican traditions brings a fresh perspective to the analysis of cultural influences and theoretical reflection on the heritage of martial arts…"-WOJCIECH J. CYNARSKI
"Written in a clear, precise and simple language, it addresses many of the topics inspiring contemporary social research on martial arts…"-CARLOS GUTIÉRREZ GARCÍA
"Jennings has…drawn together several of the key themes in martial arts studies which became highly visible during the COVID-19 pandemic."-SARA DELAMONT
"…a highly readable academic account of colorful vignettes and vivid insights shared from a lifetime in martial arts and scholarship."-DS FARRER
"…a fascinating exploration of multiple overlooked aspects of the living and breathing richness and diversity of martial arts as lived practices, often intertwined with different livelihoods, issues and aspects of health and wellbeing, and ways of growing."-PAUL BOWMAN