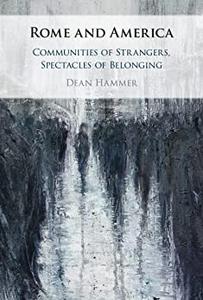 Rome and America: Communities of Strangers, Spectacles of Belonging
English | 2023 | ISBN: 1009249606 | 265 Pages | PDF | 3 MB
Rome and America provides a timely exploration of the Roman and American founding myths in the cultural imagination. Defying the usual ideological categories, Dean Hammer argues for the exceptional nature of the myths as a journey of Strangers, but also traces the tensions created by the myths in attempts to answer the question of who We are. The wide-ranging chapters reassess both Roman antecedents and American expressions of the myth in some unexpected places: early American travelogues, westerns, bare-knuckle boxing, early American theater, government documents detailing Native American policy, and the writings of Noah Webster, W. E. B. Du Bois, Booker T. Washington, and Charles Eastman. This innovative volume culminates in an interpretation of the current crisis of democracy as a reversion of the community back to Strangers, with suggestions of how the myth can recast a much-needed discussion of identity and belonging.