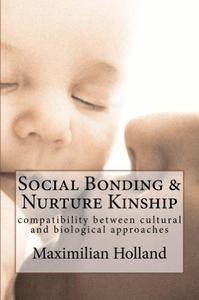 Maximilian Holland, "Social Bonding and Nurture Kinship: Compatibility between Cultural and Biological Approaches"
English | 2012 | pages: 813 | ISBN: 1480182001 | PDF | 2,1 mb
Resolving a decades long divide between what are often held to be incommensurate paradigms, Social Bonding and Nurture Kinship unites cultural and biological approaches to social life and kinship. The synthesis is non-reductive, respecting the core tenets of both paradigms, and also incorporates psychological attachment theory into the account.

Praised by adherents of both perspectives, the work provides a thorough survey of the theoretical debates and empirical findings across a wide array of disciplines, providing students of social behaviour and kinship with a rich and comprehensive resource. This work is a powerful example of how social and physical sciences can unite on equal terms, without the danger of one being subsumed by the other. Both approaches emerge stronger as a result.
Scholarly Reviews
* A landmark in the field of evolutionary biology, which places genetic determinism in the correct perspective.
– Folia Primatologica Journal
* I will be strongly recommending this book to all of my advanced undergraduates, masters and PhD students, as well as to my colleagues. Not only does it help to resolve debates that have run for many years, but it is also an outstanding example of what can be achieved by immersing oneself in literature from different fields, while retaining an intellectual openness and exercising incisive analysis… a shining example of what can be achieved when excellent scholars engage fully across disciplinary boundaries.
– Acta Ethologica Journal
* Maximilian Holland gets to the heart of the matter… If he had been in the debate in the 1980s then a lot of subsequent confusion could have been avoided.
– Robin Fox, Emeritus Professor of Anthropology, Rutgers. NAS Member
* Max Holland has demonstrated extraordinarily thorough scholarship in his exhaustive review of the often contentious discussions of kinship. He has produced a balanced synthesis melding the two approaches exemplified in the biological and sociocultural behavioral positions… This should be the definitive word on the subject.
– Irwin Bernstein, Distinguished Research Professor of Primatology, Georgia
* A brilliant discussion of the relationship between kinship and social bonding as understood in evolutionary biology and in sociocultural anthropology.
– Kirk Endicott, Emeritus Professor of Anthropology, Dartmouth
* His synthesis is lucid and effective… Holland has produced a significant work of scholarship that will be of interest to a wide swath of the anthropological community."
– Critique of Anthropology Journal
* A tremendously useful resource for students of kinship in anthropology, psychology and biology who are interested in looking beyond the confines of their own discipline… highly relevant for anyone interested in this exciting field.
– Social Anthropology Journal
* Max Holland has provided a wide-ranging and deeply-probing analysis of the influence of genetic relatedness and social context on human kinship. He argues that while genetic relatedness may play a role in the evolution of social behavior, it does not determine the forms of such behavior. His discussion is exemplary for its thoroughness, and should inspire more nuanced ventures in applying Darwinian approaches to sociocultural anthropology.
– Philip Kitcher, John Dewey Professor of Philosophy, Colombia. Fellow of the American Academy of Arts and Sciences
* Unlike many commentators who have tackled kinship in the context of biology, Holland takes culture seriously and deals fairly with Schneider’s arguments… This book helps to untangle a long-standing disciplinary muddle.
– Richard Feinberg, Professor of Anthropology, Kent State