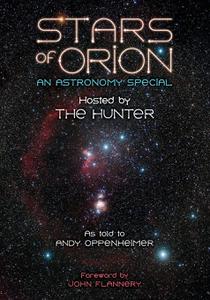 A giant hunter etched in the cosmos.
A wonder to behold on cold winter nights.
Recognised by generations by the three bright stars on his Belt, the celestial glory of Orion is photographed and studied by thousands of skywatchers worldwide.
So – the Hunter himself has invited 45 astronomers to showcase their stunning photos of his stars, nebulae, and many other wondrous deep-sky objects in his Constellation!
Each astronomer tells how they took their pictures, when they became inspired by astronomy, and why this iconic warrior of the heavens became a favourite target.
Guest essays telling the science and story of Orion are featured alongside a host of Fun Facts and Guides to help you capture the Mighty Hunter in the night sky.
With a Foreword by Irish astronomer John Flannery, Stars of Orion is a spellbinding fusion of the astronomical, the mythical, and the personal for stargazers of all ages – and everyone who loves Orion!