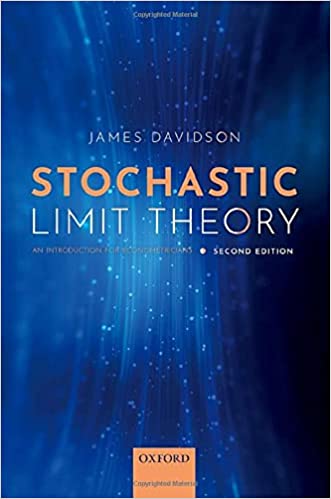 Stochastic Limit Theory, published in 1994, has become a standard reference in its field. Now reissued in a new edition, offering updated and improved results and an extended range of topics, Davidson surveys asymptotic (large-sample) distribution theory with applications to econometrics, with particular emphasis on the problems of time dependence and heterogeneity.
The book is designed to be useful on two levels. First, as a textbook and reference work, giving definitions of the relevant mathematical concepts, statements, and proofs of the important results from the probability literature, and numerous examples; and second, as an account of recent work in the field of particular interest to econometricians. It is virtually self-contained, with all but the most basic technical prerequisites being explained in their context; mathematical topics include
measure theory, integration, metric spaces, and topology, with applications to random variables, and an extended treatment of conditional probability. Other subjects treated include: stochastic processes, mixing processes, martingales, mixingales, and near-epoch dependence; the weak and strong laws of
large numbers; weak convergence; and central limit theorems for nonstationary and dependent processes. The functional central limit theorem and its ramifications are covered in detail, including an account of the theoretical underpinnings (the weak convergence of measures on metric spaces), Brownian motion, the multivariate invariance principle, and convergence to stochastic integrals. This material is of special relevance to the theory of cointegration. The new edition gives updated and
improved versions of many of the results and extends the coverage of many topics, in particular the theory of convergence to alpha-stable limits of processes with infinite variance.