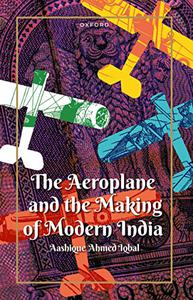 From airports crowded with refugees desperate to flee Partition violence to the mountainous battlefields of Kashmir, aircraft proved indispensable to newly independent India. The aeroplane played a small but significant role in India’s transformation from a British colony to an independent republic. Through the prism of aviation, both civil and military, ‘The Aeroplane and the Making of Modern India’ charts India’s journey from the Second World War to the
nationalization of Indian airline companies in 1953. For independent India, the aeroplane represented not only a powerful means of projecting state power but also a symbol of what it meant to be modern. This was not lost on other contenders for sovereignty in South Asia. Both Pakistan and the Indian princes
also invested extensively in aviation in the hopes of bolstering their power and legitimacy in South Asia. Drawing on numerous archives, untapped personal collections, and newspaper reports in India and the United Kingdom, Aashique Iqbal provides the first comprehensive history of the Indian state’s engagement with aviation. Featuring a rich cast of characters including Indian maharajas, Polish pilots, American entrepreneurs, Australian adventurers, and British Air Force officers, this book
tells the story of how the aeroplane helped make modern India.