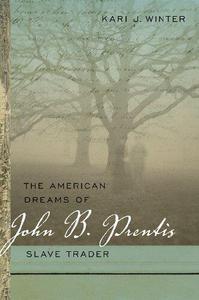 The American Dreams of John B. Prentis, Slave Trader By Kari J. Winter
2011 | 224 Pages | ISBN: 0820338389 | PDF | 9 MB
As a young man, John B. Prentis (1788-1848) expressed outrage over slavery, but by the end of his life he had transported thousands of enslaved persons from the upper to the lower South. Kari J. Winter’s life-and-times portrayal of a slave trader illuminates the clash between two American dreams: one of wealth, the other of equality.Prentis was born into a prominent Virginia family. His grandfather, William Prentis, emigrated from London to Williamsburg in 1715 as an indentured servant and rose to become the major shareholder in colonial Virginia’s most successful store. William’s son Joseph became a Revolutionary judge and legislator who served alongside Thomas Jefferson, Patrick Henry, and James Madison. Joseph Jr. followed his father’s legal career, whereas John was drawn to commerce. To finance his early business ventures, he began trading in slaves. In time he grew besotted with the high-stakes trade, appeasing his conscience with the populist platitudes of Jacksonian democracy, which aggressively promoted white male democracy in conjunction with white male supremacy.Prentis’s life illuminates the intertwined politics of labor, race, class, and gender in the young American nation. Participating in a revolution in the ethics of labor that upheld Benjamin Franklin as its icon, he rejected the gentility of his upbringing to embrace solidarity with "mechanicks," white working-class men. His capacity for admirable thoughts and actions complicates images drawn by elite slaveholders, who projected the worst aspects of slavery onto traders while imagining themselves as benign patriarchs. This is an absorbing story of a man who betrayed his innate sense of justice to pursue wealth through the most vicious forms of human exploitation.