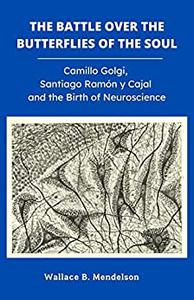 The Battle Over the Butterflies of the Soul: Camillo Golgi, Santiago Ramon y Cajal and the Birth of Neuroscience by Wallace B. Mendelson
English | January 1, 2023 | ISBN: N/A | ASIN: B0BRJNYNTB | 103 pages | EPUB | 2.02 Mb
In December 1906, two scientists, the Italian Camillo Golgi and the Spaniard Santiago Ramуn y Cajal, arrived in Stockholm to jointly receive the Nobel Prize in Physiology or Medicine. Golgi had discovered a breakthrough method of visualizing neurons under the microscope in 1873. He also believed that the nervous system was different from the rest of the body: instead of being composed of a multitude of individual cells, he thought it was one vast ‘reticulum’ of cells which were anatomically fused together, making ‘unity of action’ possible. Cajal, a decade younger, had improved on Golgi’s method and concluded that neurons, which he sometimes called ‘the butterflies of the soul’, were contiguous, but not actually continuous, and communicated across gaps between them. His view, known as the ‘neuron doctrine’, specified that individual neurons were the basic anatomic and functional building blocks of the nervous system, and ultimately became the foundation of the field of neuroscience. Though the two had been vigorous rivals for two decades, they had never actually met face to face, and never would again. But on this one occasion they produced a memorable drama: two joint winners of the Nobel Prize using their lectures to attack the other’s research.