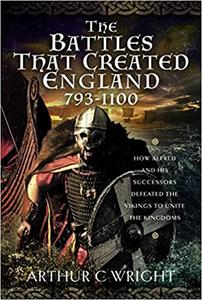 Arthur C Wright, "The Battles That Created England 793-1100: How Alfred and his Successors Defeated the Vikings to Unite the Kingdoms"
English | ISBN: 1399087983 | 2023 | 256 pages | EPUB | 5 MB
In popular imagination the warfare of the Early Middle Ages is often obscure, unstructured, and unimaginative, lost between two military machines, the ‘Romans’ and the ‘Normans’, which saw the country invaded and partitioned. In point of fact, we have a considerable amount of information at our fingertips and the picture that should emerge is one of English ability in the face of sometimes overwhelming pressures on society, and a resilience that eventually drew the older kingdoms together in new external responses which united the ‘English’ in a common sense of purpose.

This is the story of how the Saxon kingdoms, which had maintained their independence for generations, were compelled to unite their forces to resist the external threat of the Viking incursions. The kingdoms of East Anglia, Mercia, Northumbria, Kent, Essex, Sussex, and Wessex were gradually welded into one as Wessex grew in strength to become the dominant Saxon kingdom.
From the weak Æthelred to the strong Alfred, rightly deserving the epithet ‘Great’, to the strong, but equally unfortunate, Harold, this era witnessed brutal hand-to-hand battles in congested melees, which are normally portrayed as unsophisticated but deadly brawls. In reality, the warriors of the era were experienced fighters often displaying sophisticated strategies and deploying complex tactics.
Our principal source, replete with reasonably reliable reportage, are the
Read more