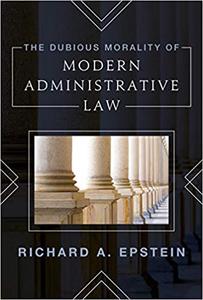 Richard Epstein, "The Dubious Morality of Modern Administrative Law"
English | ISBN: 1538141493 | 2020 | 240 pages | EPUB | 479 KB
Modern administrative law has been the subject of intense and protracted intellectual debate, from legal theorists to such high-profile judicial confirmations as those conducted for Supreme Court justices Neil Gorsuch and Brett Kavanaugh. On one side, defenders of limited government argue that the growth of the administrative state threatens traditional ideas of private property, freedom of contract, and limited government. On the other, modern progressives champion a large administrative state that delegates to key agencies in the executive branch, rather than to Congress, broad discretion to implement major social and institutional reforms. In this book, Richard A. Epstein, one of America’s most prominent legal scholars, provides a withering critique of how the administrative state has gone astray since the New Deal.

First examining how federal administrative powers worked well in an earlier age of limited government, dealing with such issues as land grants, patents, tariffs and government employment contracts, Epstein then explains how modern broad mandates for delegated authority are inconsistent with the rule of law and lead to systematic abuse in a wide range of subject matter areas: environmental law; labor law; food and drug law; communications laws, securities law and more. He offers detailed critiques of major administrative laws that are now under reconsideration in the Supreme Court and provides recommendations as to how the Supreme Court can roll back the administrative state in a coherent way.
Read more