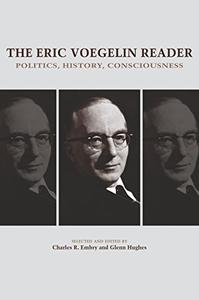 Charles R. Embry, "The Eric Voegelin Reader: Politics, History, Consciousness"
English | 2017 | ISBN: 0826221343, 0826222897 | EPUB | pages: 464 | 0.4 mb
By the time Eric Voegelin fled Hitler’s regime and made his way to the United States in 1938, he had already written four books criticizing Nazi racism, establishing what would be the focus of his life’s work: to account for the endemic political violenceof the twentieth century. One of the most original political philosophers of the period, Voegelin has largely avoided ideological labels or categorizations of his work. Because of this, however, and because no one work or volume of his can do justice to his overall project, his work has been seen as difficult to approach.

Drawing from the University of Missouri Press’s thirty-four-volume edition of The Collected Works of Eric Voegelin (1990-2009), Charles Embry and Glenn Hughes have assembled a selection of representative works of Voegelin, satisfying a longstanding need for a single volume that can serve as a general introduction to Voegelin’s philosophy. The collection includes writings that demonstrate the range and creativity of Voegelin’s thought as it developed from 1956 until his death in 1985 in his search for the history of order in human society.
The Reader begins with excerpts from Autobiographical Reflections (1973), which include an orienting mixture of biographical information, philosophical motivations, and the scope of Voegelin’s project. It reflects key periods of Voegelin’s philosophical development, pivoting on his flight from the Gestapo.
The next section focuses on Voegelin’s understanding of the contemporary need to re-ground political science in a non-positivistic, post-Weberian outlook and method. It begins with Voegelin’s historical survey of science and scientism, followed by his explanation of what political science now requires in his introduction to The New Science of Politics. Also included are two essays that exemplify the practice of this "new science." Voegelin started his academic career as a political scientist, and these early essays indicate his wide philosophical vision.
Voegelin recognized that a fully responsible "new science of politics" would require the development of a philosophy of history. This led to the writing of his magnum opus, the five-volume Order and History (1956-1985). This section of the Reader includes his introductions to volumes 1, 2 and 4 and his most essential accounts of the theoretical requirements and historical scope of a philosophy of history adequate to present-day scholarship and historical discoveries.
In the course of his career, Voegelin came to understand that political science, political philosophy, and philosophy of history must have as their theoretical nucleus a sound philosophical anthropology based on an accurate philosophy of human consciousness. The next set of writings consists of one late lecture and four late essays that exemplify how Voegelin recovers the wisdom of classical philosophy and the Western religious tradition while criticizing modern misrepresentations of consciousness. The result is Voegelin’s contemporary accounts of the nature of reason, the challenge of truly rational discussion, and the search for divine origins and the life of the human spirit.
During his philosophical journey, Voegelin addressed the historical situatedness of human existence, explicating the historicity of human consciousness in a manner that gave full due to the challenges of acknowledging both human immersion in the story of history and the ability of consciousness to arrive at philosophically valid truths about existence that are transhistorical. The essays in this final section present the culmination of his philosophical meditation on history, consciousness, and reality.