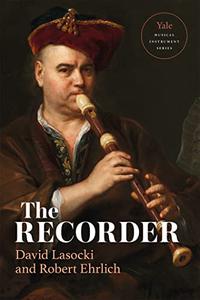 The fascinating story of a hugely popular instrument, detailing its rich and varied history from the Middle Ages to the present
The recorder is perhaps best known today for its educational role. Although it is frequently regarded as a stepping-stone on the path toward higher musical pursuits, this role is just one recent facet of the recorder’s fascinating history-which spans professional and amateur music-making since the Middle Ages.
In this new addition to the Yale Musical Instrument Series, David Lasocki and Robert Ehrlich trace the evolution of the recorder. Emerging from a variety of flutes played by fourteenth-century soldiers, shepherds, and watchmen, the recorder swiftly became an artistic instrument for courtly and city minstrels. Featured in music by the greatest Baroque composers, including Bach and Handel, in the twentieth century it played a vital role in the Early Music Revival and achieved international popularity and notoriety in mass education. Overall, Lasocki and Ehrlich make a case for the recorder being surprisingly present, and significant, throughout Western music history.