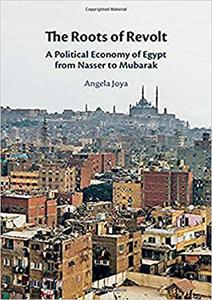 Angela Joya, "The Roots of Revolt: A Political Economy of Egypt from Nasser to Mubarak"
English | ISBN: 1108478360 | 2020 | 280 pages | PDF | 5 MB
A conceptually rich, historically informed, and interdisciplinary study of the contentious politics emerging out of decades of authoritarian neoliberal economic reform, The Roots of Revolt examines the contested political economy of Egypt from Nasser to Mubarak, just prior to the Arab Uprisings of 2010-11. Based on extensive fieldwork conducted across rural and urban Egypt, Angela Joya employs an ‘on the ground’ approach to critical political economy that challenges the interpretations of Egyptian politics put forward by scholars of both democratization and authoritarianism. By critically reassessing the relationship between democracy and capitalist development, Joya demonstrates how renewed authoritarian politics were required to institutionalize neoliberal reforms demanded by the International Monetary Fund, presenting the real-world impact of economic policy on the lives of ordinary Egyptians before the Arab Uprisings.