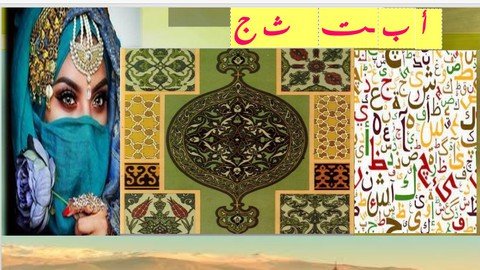 What you’ll learn
arabic letters and its sounds
words for each letter
types of Arabic sentences
Arabic conversations
Requirements
only interesting in Arabic language
Description
Arabic is an old language . It is believed to have originated in the Arabian Peninsula. rabic, which first emerged in the northwest of the Arabian Peninsula, is a member of the Semitic family of languages which also includes Hebrew and Aramaic. Whilst very early manifestations of Arabic date back as far as the 8th century BCE, the language has been defined and refined over a considerable period of time.Arabic is at least 1,500 years old. Classical Arabic originated in the sixth century, but earlier versions of the language existed, including the Safaitic dialect, an old Arabic dialect used by the pre-Islamic nomadic inhabitants of the Syro-Arabian desert. Some of its inscriptions date back to the first century.Proto-Arabs are presumed to have originated from what is now modern-day Hejaz and Najd in Saudi Arabia. Arabs spread from there to the central and southern parts of the Levant, sometimes replacing previously spoken Semitic languages. Arabic is widely taught in schools and universities around the world and is used to varying degrees in workplaces, governments and the media.[9] Arabic, in its standard form, is the official language of 26 states, as well as the liturgical language of the religion of Islam, since the Quran and the Hadiths were written in Arabic.[10]Arabic has influenced many other languages around the globe throughout its history especially languages of Muslim cultures and countries that were conquered by Muslims. Some of the most influenced languages are Persian, Turkish, Hindustani (Hindi and Urdu),[12] Kashmiri, Kurdish, Bosnian, Kazakh, Bengali, Malay (Indonesian and Malaysian), Maldivian, Pashto, Punjabi, Albanian, Armenian, Azerbaijani, Sicilian, Spanish, Greek, Bulgarian, Tagalog, Sindhi, Odia[13] and Hausa and some languages in parts of Africa. Conversely, Arabic has borrowed words from other languages, including Aramaic, Hebrew, Latin, Greek, Persian and to a lesser extent Turkish and other Semitic languages such as Abyssinian in medieval times and languages such as English and French in modern times and some loanwords from theArabic is the liturgical language of 1.8 billion Muslims, and Arabic[14] is one of six official languages of the United Nations.[15][16][17][18] All varieties of Arabic combined are spoken by perhaps as many as 422 million speakers (native and non-native) in the Arab world,[19] making it the fifth most spoken language in the world.[20] Arabic is written with the Arabic alphabet, which is an abjad script and is written from right to left, although the spoken varieties are sometimes written in ASCII Latin from left to right with no standardized orthography. Arabic and Islam
Classical Arabic is the language of poetry and literature (including news); it is also mainly the language of the Quran. Classical Arabic is closely associated with the religion of Islam because the Quran was written in it. Most of the world’s Muslims do not speak Classical Arabic as their native language, but many can read the Quranic script and recite the Quran. Among non-Arab Muslims, translations of the Quran are most often accompanied by the original text. At present, Modern Standard Arabic (MSA) is also used in modernized versions of literary forms of the Quran.
It was first spoken by nomadic tribes in the northwestern frontier of the Peninsula 150 millions people speak Arabic to learn its vocabularies you should listen to Arabic speakers in every field listen before speak the Arabic grammar is very important to know the structure of the sentence s
how can I speak like native listen to drama listen to old songs listen to sport listen to cartoon video clips all in Arabic try to repeat the words and phrases
Who this course is for
any one interesting in arabic