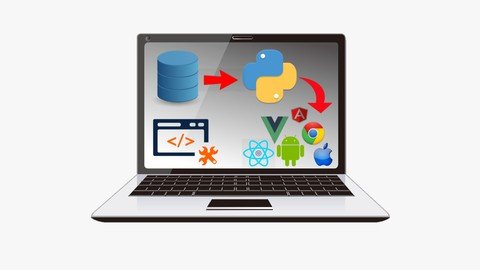 What you’ll learn
The students will learn fundamental concepts on Django
The students will learn how to create Blog and Q&A apps in Django
The students will learn that how to deploy Django Apps in Heroku and PythonAnyWhere
The students will learn about fundamental concepts in Django REST Framework (DRF)
The students will learn that how to create Backend REST API in Django
The Students will learn that how to deploy Django REST Framework in Heroku and PythonAnyWhere
Requirements
Basic Python & JavaScript Knowledge
Description
Welcome to Django & Django REST Framework with React Frontend , so first of all what is Django ?
What is Django ?
Django is a Python Web Framework that is used for web development. Django framework uses a set of design principles that produces one of the most productive web development processes compared to many other web frameworks. also Django provides a set of tightly integrated components. all of these components are developed by the Django team itself, you can use Django as a Full stack Web Framework, it means that you can build frontend an backend in Django, or you can just build your backend REST API using Django REST Framework and you can integrate that with any frontend frameworks and libraries like reactjs, vuejs or mobile frontend like react native.
What is RESTFul API’s ?
A RESTful API acts as a translator between two machines communicating over a Web service. If your familiar with the concept of API This is just like an API but it’s working on a RESTful Web service and the API is used by two applications trying to communicate with each other over a network or Internet. Web developers program REST API that server can receive data from applications. These applications can be web-apps, Android/iOS apps, etc. RESTful APIs return JSON files which can be interpreted by a variety of devices.
What is Django REST Framework ?
Django REST framework is a powerful and flexible toolkit for building Web APIs. Some reasons you might want to use REST framework
The Web browsable API is a huge usability win for your developers.
Authentication policies including packages for OAuth1a and OAuth2.
Serialization that supports both ORM and non-ORM data sources.
Customizable all the way down – just use regular function-based views if you don’t need the more powerful features.
Extensive documentation, and great community support.
Used and trusted by internationally recognized companies including Mozilla, Red Hat, Heroku, and Eventbrite.
What is React ?
React is a free and open-source front-end JavaScript library for building user interfaces based on UI components. It is maintained by Meta and a community of individual developers and companies. React can be used as a base in the development of single-page or mobile applications
This course is divided in to different parts, in the first part we are going to have introduction to the course, in the second part we are going to build a blog application using django, in this section we focus on fundamental concepts of django, also we deploy our django app to Heroku, in the third part we are going to build a Chatbot using Google DialogFlow and after that we integrate our Chatbot with Django Blog Application. in the fourth part we are going to build a question and answer app and we deploy our app to PythonAnyWhere. in the fifth part we are going to dive in to building backend REST API using Django and Django REST Framework, we focus on fundamental concepts of Django REST Framework, also we deploy our Django REST Framework to Heroku. in the sixth part we create our backend REST API for our question and answer app, also we deploy our DRF in the PythonAnyWhere, in the seventh part we are going to integrate our Backend REST API with React Frontend.
Who this course is for
Beginner Level