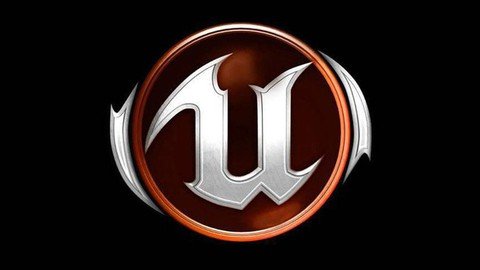 What you’ll learn
Learn game development using Unreal Engine 5
Define custom inputs and movements to control characters
Build realistic looking environments for games to take place in
Script logic to define gameplay without needing to know how to code
Create a third person character with movement mechanics and animation
Create hostile enemies, with AI that pursues and attacks the player
Game Mode and HUD with countdown timers, health bars, announcements, game states and score
Weapons and combat with effects including sounds and particle systems
Make a challenging timed game with a goal to clear the area of enemies
Implement Health, ammo pickups and more
Requirements
Recommended: Desktop PC with Windows 7 (or later) 64-bit or a Mac with (Mac OSX) 10.9.2 or later
Recommended: 8 GB RAM
Recommended: Quad-core Intel or AMD processor, 2.5 GHz or faster
Recommended: DirectX 11 compatible video card
Unreal Engine 5 will run on desktops and laptops with specifications under these, but performance may be affected
Description
Learn game development with Unreal Engine 5. UE5 is the industry-leading 3D game design software that the professionals use to create today’s top games. Start your journey towards getting paid to make video games today!
Learn Video Game Development with this Unreal Engine 5 Course for Beginners to Intermediate UE5 Developers .
Begin your game development career with possibly the most up-to-date game dev course on the internet – Unreal Engine 5: The Third Person Shooter Course. Every lecture in this course was filmed using the full version of Unreal Engine 5, released in April 2022.
This course was designed for those who want to learn as much about Unreal Engine 5 as possible. If you’re interested in becoming an indie developer or even working for a major studio, then this is a course for you to start with. This course will teach you some beginner to intermidiate skills needed in the workplace.
This course covers the fundamentals that other courses skip, causing you to get confused as you try to learn more advanced topics. The course will cover the following topics in thorough detail
Projects & Levels
Actor Types
Characters & Input
Collisions
Blueprint Logic & Data
User Interfaces
Audio
Develop Games Using Cutting-Edge Game Design Software and Run Them on a State-of-the-Art 3D Game Engine The Unreal Engine has won the “Best Game Engine” award several times from various organizations, including the Develop Industry Excellence Awards and Game Developer Magazine.
The Unreal Engine has been used to develop many blockbuster movies, games and game franchises including the new movie Matrix: Resurrections, Fortnite, BioShock, Gears of War, Splinter Cell, Rainbow 6, Borderlands, Dishonored, Mass Effect, Batman: Arkham Asylum, and hundreds more.
For years, the Unreal Engine was only affordable for large companies, but now, Unreal Engine 5 is completely free to use, as long as you agree to pay Epic Games 5% of your game sales over $1 million.
Learn Unreal Engine 5 in this Video Game Design Course In this course, you will learn the fundamentals of game development using the Unreal Engine 5 through a series of lectures and tutorials.
By the end of the course, you will have built an entire demo game from scratch. The course will start from scratch and -NO- programming knowledge is required, so anyone with basic computer skills can jump in and begin their Unreal Engine 5 training!
The first part of the course will help you get the Unreal Engine 5 up and running and will introduce you to the basic concepts of game development using the Engine. Next, you will learn all the skills you need to craft beautiful environments to stage your games in. Then, you will learn how to script logic for your games so you can define game rules and behaviors, keep track of data such as health and inventory, and create playable characters. You will learn about collisions and damage, key concepts for any action game. You will learn how to create user interfaces using the UMG Editor, so you can add things like menus, load screens, and HUDs to your game. And finally, you will learn how audio works within the Engine so you can add music, dialogue, and sound effects to your game.
Upon completion of the course, you will have the skills necessary to translate ideas for games into playable games that use environments you sculpt and logic that you define, and you will understand how to make a game in Unreal Engine 5.
Who this course is for
This video game development course is for absolute beginners who are interested in making games & learning how to design a game from scratch using UE5
Designed for those who want to become professionals using Unreal Engine 5
No programming experience required